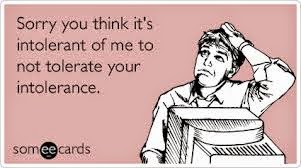 That family with a lot of kids who are homeschooled and very fundamental Christian in their religious ideology has been in the news a bit lately.  There was the snafu of the '1st kiss' pictures on their facebook page where folks from the LGBT community posted their own kiss pictures with their partners and then there was the robocall the matriarch of this clan put out that likened transgender human beings to pedophiles.  As expected, facebook, twitter, etc BLEW UP with posts, comments, and memes either in support of the clan's statements and beliefs or opposing them.  I, myself, crawled out from under the evolutionary rock from which I sprang to post a comment or two, share a meme, and give rise to my ire at the offensive implication that was made toward the LGBT community.

It was through these exchanges that I was banned from one facebook page with all my comments deleted.  So many others also commented that the owner of the page felt the need to delete all such remarks, ban all who opposed the discriminatory ideology, and make this post:


..."I am finding that people are coming here attacking Christians and saying that we need to be "tolerant" of their beliefs, but not vice versa. I find it repugnant that my beliefs, faith and morals are NOT tolerated. I find it repugnant that freedom of religion continues to be trampled upon in this nation, something that was so very important to our founding fathers. I find it repugnant that the Constitution has become irrelevant and disrespected. It is beyond words that people have redefined freedom of speech to fit their own narrow definition. It applies to EVERYONE, no matter what. That is what my husband has fought for in 2 wars, and hundreds of thousands before him. I will not stand silent while his sacrifice is demeaned and my faith attacked. I will have to tolerate the beliefs of those I disagree with and demand that the same be done in return. That is civility. And so many here on FB have proven that they lack their quality."

Hey, it's her facebook page - she can do as she wants.  I have, upon rare occasion, banned a few folks from the IH facebook page.  The ones I ban are the ones that post such obscene and offensive hate speech or  just religiously repugnant ideology, that I literally can't stomach having their comments on my facebook page.  So, I support her right to delete commentary and ban people.  It's her page.  But it did get me to thinking about rights and tolerance...
Read more »
Posted by The Inappropriate Homeschooler at 12:53 PM 6 comments:


It's been a coon's age (living in the south has its effects) since I blogged.  Truthfully I'm not sure how long a coon's age is, I'll have to google that, but I know it's been months.   The time since we started 7th grade when I posted our new school year beginning and now A LOT has happened in our lives.  A LOT.  First, I was eating, sleeping, breathing, and quite honestly, shitting all things conference related.  THAT was it.  Well, that and still trying to homeschool and keep the IH facebook page and support group going.  I can't say for certain, and I don't want to check, in case I'm right, but I *think* my husband mumbled something about divorcing me if my schedule stayed the way it was for much longer.  I always said that on September 10th I would be doing NOTHING, as a well-deserved rest from all things N.A.S.H. and the conference.  What I didn't know was that 'rest' I needed required more than one day and did in fact last for longer than a week and then before I knew it, it was birthdays, Halloween, and the most major flare-up of my fibromyalgia I have ever experienced.

In the midst of all that, my father fell off a ladder - he's 83 - and had a concussion.  Then, my husband had eye surgery and then knee surgery.  Then my father fell again and shattered his femur and he's still a patient at the rehab center.  My best friend's (of 29 years) mother had a major stroke at the same time and is still in rehab and is not doing as well as we hoped.  Meanwhile my flare-up continued and continued.......most days we homeschooled from my bed and we only covered the 'necessary'.

So, that catches you up on what has been going on in our lives for the last three months and what kept me from blogging.  I'm feeling somewhat better and I actually have something to talk about that *may* be of interest, so here I am again.  With all that life continues to throw at us, often times Punky finishes her daily assignments - grammar lesson, vocabulary lesson, and math lesson - and is left asking what she should do next.  In an effort to give her the direction and suggestions she needs, yet still allow her choices in how she spends her time, I had been pondering a new method for our homeschooling experience.  As it was, so much of our days were filled with *real* life, real experiences, that it felt like any learning she was doing was coming from those real life experiences.
Read more »
Posted by The Inappropriate Homeschooler at 4:16 PM 2 comments: 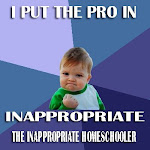